As one player quickly learned on Wednesday: there’s no such thing as “Survivor trust.”

This week, the Final 6 fought for her life in the game, as a bottom-playing castaway tried to convince the entire tribe to vote for her. While everyone remained a target for their own very specific reasons, the influx of idols and the last chance to play Shot in the Dark turned every possible plan into a giant, impending question mark. But which plan worked and who was sent packing? And which five players will face off in the season finale (airing Wednesday, May 25 at 8/7c)? Read on for a full recap.

With Drea gone, Lindsay’s amulet morphed into a full-fledged immunity idol. But can anything stop Omar at this point? He lets out a maniacal laugh as all his plans come to fruition. But he’s not going all out with Russell Hantz just yet: he’s actually returning Mike’s idol, as promised. But Mike is not a model! He knows Omar could beat him in Final 3, and knows he needs to cut him as soon as possible.

But first, he has to plant a seed with Maryanne, who fully understands that she too can’t beat Omar. She tells Mike about her extra vote and considers stabbing her ally, despite her love and trust. “If I don’t make that move, I’m not going to win, and that’s terrifying,” she says (correctly).

Jonathan says the Taku Four won’t go any further together than Final 6. Even he knows he can’t win with Lindsay and Omar in the match and so, “It’s time to break up.”

REWARD | Players must unwind a rope and then navigate a series of obstacles, collecting the key to certain puzzle pieces along the way. The first to complete a puzzle wins the choice between chicken and vegetables, and chocolate cake and cookies. Is it worth playing? Damn yes, Jeff!

Jonathan is the first to solve the puzzle (because of course he is), but Omar is the one who does the work and wins the food. He chooses cake and cookies, and chooses Romeo, Maryanne, and Mike to snack with him.

CAMP | Much of the conversation revolves around Mike coming home, but Jonathan knows Lindsay is up to something. And she is. She wants him gone. The tricky part: They have to beat Jonathan at the immunity challenge. Mike tells Jonathan and Maryanne about Lindsay’s idol and uses the information to try to convince them that she and Omar should be separated. Maryanne realizes she is unaware with Lindsay, which seems to up her mental game.

IMMUNITY IS BACK TO GRAB | Players must run over a series of obstacles and over a bridge that contains puzzle stages. These steps will help them build a staircase. Maneuver a bag of balls into a high tower, complete a maze of tables, earn immunity.

Lindsay is the first to set her starting steps in place and the first to get her balls up the maze of tables. Jonathan, Omar and Mike are not far behind. Both Jonathan and Lindsay sink their first balls, making it a showdown between the two former members of Taku. But Lindsay ultimately defeats Goliath, earning her second individual immunity of the season.

STRATEGY | Jonathan thinks Mike is the plan, but Lindsay hopes everyone will join her in voting out Jonathan. Lindsay tells Omar that it’s best that she doesn’t use her idol as she doesn’t want another one to be re-hidden the next day. (I don’t quite remember someone do not using an idol for that reason, but it’s a smart take.) Maryanne is stuck on her Omar plan which worries Mike, but she assures everyone that with her extra vote, they can get him out. But Jonathan and Mike don’t trust Romeo to pull through. It looks like it could be anyone tonight, but we know one thing for sure: won’t be Lindsay. 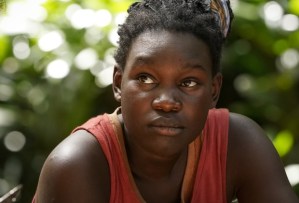 TRIBAL COUNCIL | Jeff says he can smell the terror and desperation in the air. At this point, everyone is looking towards Final 3, and everyone’s threat level is at its highest. There’s less room to hide, Omar says, while Lindsay hopes everyone she’s spoken to trusts what she said earlier. Jonathan knows something is lying though. Neither vote went exactly as planned, he says, and someone is about to be caught off guard. It is also the last Tribal Council where the Shot in the Dark can be played, which Maryanne says prevents any votes from being swept away.

The band votes, and NO ONE PLAYS AN IDOL? ! (How is that even possible so late in the game?) Jeff manages to score, and it’s a 2-2-2 tie between Jonathan, Romeo and Omar…but there’s one vote left. “You did it?” Omar asks Maryanne. “I did,” she replies. Talk about a CV boost because that seventh vote reads “Omar” and sends the game’s master strategist straight to Ponderosa.

Impressed by Maryanne’s move? Was Omar your choice to win it all? Let us know everything by dropping some comments below!

Billie Eilish said she’d rather die than not have children